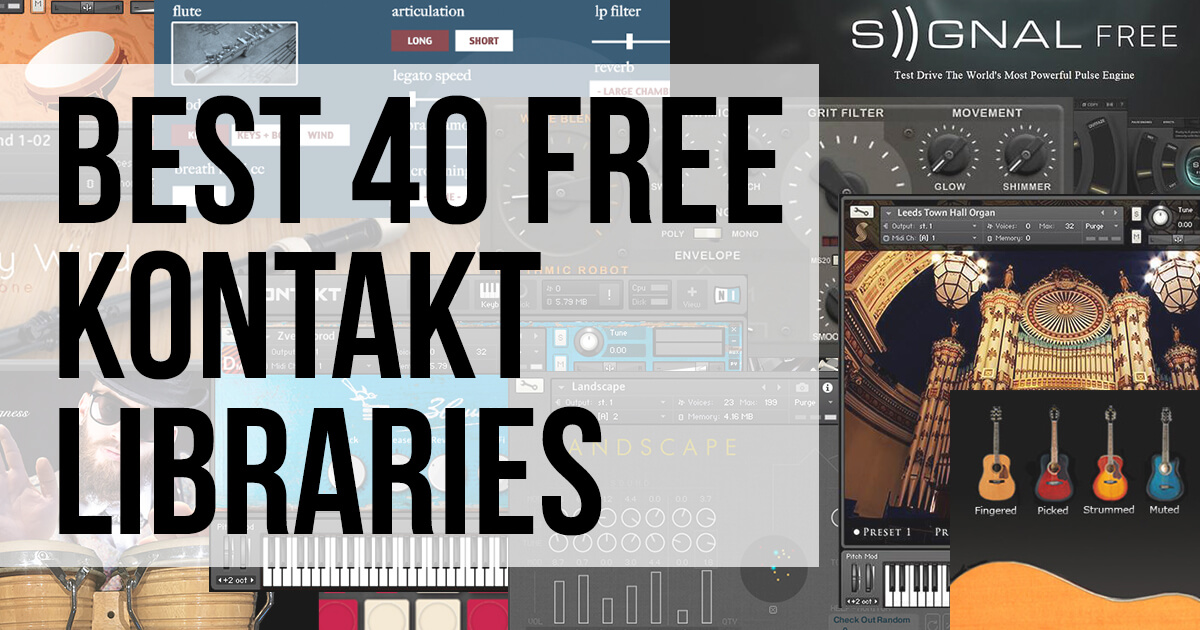 40 of the Best Free Libraries

Dating back to 1995, Berlin-based Native Instruments has been a mainstay in the digital audio world for much of the 21st Century. The modular synth, Reaktor, was the company’s flagship product, then called Generator and the software sampler Kontakt made its debut in the early 2000s.

While many of Native Instruments’ products seem oriented to the DJ market, the sheer versatility of Kontakt made it appealing to virtually all digital music creators. Kontakt emerged from a crowded playing field by taking a note from the Adobe playbook. Just as Adobe makes a read-only version of its PDF creation software, NI offers both a full-featured commercial version of Kontakt as well as a free offering that concentrates on playback that includes a smaller library of sounds. Both products are in version 6 at the time of publication.

If you’ve purchased the full Kontakt Komplete package, you have a very affordable option for widely expanding your personal sound library collections. Third-party creators produce sound libraries for use with Kontakt, and many of these have no cost to you. That’s right, free sounds. Some of these are development products or teasers for the developer’s own commercial offerings, but the field for free libraries is robust and varied. Here we look at 40 developers making notable free packages for use with Kontakt. There’s something here for virtually everyone, so dig deep and enjoy.

Providers with multiple Kontakt
instruments available at no charge.

With files downloadable through BitTorrent for free or direct download with a donation, Ivy Audio offers four free Kontakt libraries, what they call ‘proof-of-concept’ libraries, interesting and valid products that aren’t fully realized as commercial releases. Rather than wasting the development time, Ivy Audio offers these as free downloads.

French recording artist and producer Hugo Kant offers up a gaggle of tasty sample libraries in several formats including Kontakt. These are sure to appeal to jazzy trip hop tastes.

The internet is full of public domain instrument samples, but these can be disorganized, incomplete, hard-to-find and in incompatible formats. The Alpine Project seeks to compile these lost treasures into coherent Kontakt libraries. The results? So far, so good. They’re still on the hunt for samples that fill voids to make additional libraries.

Makers of a wide range of commercial Kontakt samples, Impact Soundworks releases useful teasers as free libraries. Teasers they are, and it’s likely more than one user of the free packages delves into their commercial catalog.

Wavesfactory is another creator of Kontakt instruments for sale, who also offer full instrument libraries for free as teasers. The no-charge offerings here are somewhat more off the beaten path, getting into sound effects as well as chromatic instruments and percussion.

With three completely free library offerings, Soniccouture certainly participates in the teaser game. But they also add value with exclusive content from which you can choose each time you make a purchase from their regular libraries, an excellent way to extend your sample budget.

A blog-based site of varying activity around the blogger’s real life, there’s a wide, if somewhat disorganized, taste of sample libraries around the ‘net. There seems to be some activity to move to a more website-like presentation, but in the meantime, links to the blogs with the free libraries are listed below.

More teaser-bait here, from a commercial provider that doesn’t seem very active these days, but whose older instruments retain sufficient quality to remain valid. Their Free Stuff page has some varied gems with a couple of standouts. There’s even a Kontakt time code clock utility.

Crypto Cipher Audio Lab presents a sample pack with 10 Indian instruments in a single download, drawn from the company’s commercial products and other sources. The New Delhi-based lab is an Indian music specialist.

Released in formats for multiple platforms including Kontakt, this impressive pipe organ package takes you to the town hall of the city of Leeds, where samples were drawn from an actual 150-year old instrument.


There are 10 NanoMods in the Rhythmic Robot Audio series, each priced so that you get change back from a five-dollar bill. As a freebie, NanoMod7 does that one better, serving as your teaser into this intriguing series.

There’s a pure whimsy about an authentic music box sample, and a vivid sample of the winding mechanism puts this Frozenplain instrument over the top in an entirely good way.


Despite the modesty of its title, Simple Flute has enough flexibility to suffice as an ensemble instrument with its easy-to-grasp interface yet with features such as trills, grace notes and flexible vibrato.


Fans of cinematic composition will eat up the fat pads and effects of Project Exodus. There’s little need for fussing with programming as rich layers are ready right out of the box. A freebie that is worthy of the word “epic.”


If you want to polish a vocal track, background vocals are often a must. If you want to save time recording these notorious time hogs, you need something like SoundBetter’s Singers. Ahs, ohs and oohs, from five different vocalists.


A beauty of sound-shaping samplers is the ability to create “impossible” instruments. A glockenspiel played with a bow certainly qualifies here. A glowing metallic sound, but with a soft attack.

For those who can never have too many pianos in their arsenal, the Amore Grand Piano adds a warm and romantic keyboard to your collection.


And if you need a specialty piano, Cinesamples took two Steinways and sampled them simultaneously, creating a heavy and dramatic sound that’s perfect for tension scores or anywhere low but bright piano notes might fit.


A haunting toy piano sampled from a Russian device. Even the interface captures the ragged retro vibe reflected in the wavery, percussive sounds. Not your everyday piano.


Another library built around public domain samples, Xtant Audio uses the sound modeling capabilities of Kontakt to overcome the shortcomings of internet finds, which often have little or no layering or multisamples.


A well-recorded cello sample, this pocketBlakus freebie sounds great as a solo instrument and should blend nicely in ensembles. Be ready to throw your favourite reverb plugin over these dry samples for maximum lush string beauty.


The richness of an 80-year old recorder features in this free instrument that adds some very intuitive controls, making a very playable sound. The round-robin programming is particularly effective, and the polyphonic mode, while less realistic, is a neat shortcut for layers woodwinds.


A free 6 gigabyte library featuring 300 Kontakt instruments? Yes. Is there much more to say about this product? There really isn’t. Keep it handy for random inspiration or that unexpected sound that brings a track together.


Looking like a djembe with an eating disorder, the narrow-waisted darabuka has a well-articulated ringing tone that should cut through nicely on any track that needs world music percussion influences. No round-robins, but 4 velocity layers give a realistic sound.


The Vermona DRM analog drum machine dates to the mid-1980s, an interesting alternative to the vintage Roland drum machines of the same era. They’re not easy to find today, making this library a goldmine for those who use old school electronic drum sounds regularly.


Seeing the Sennheiser name on a list of Kontakt libraries likely raises a few eyebrows. This is also one of the few libraries on the list that works with Kontakt Player as well as Kontakt Komplete. What do you get? It’s a very well-recorded virtual acoustic drum set instrument, loaded with samples, functions and even MIDI grooves. With Sennheiser’s reputation as a microphone manufacturer, you know the sounds will be exceptional.


Another cinematic teaser collection, this Audio Imperia freebie was created by Australian sound designer Generdyn, aka Joshua Crispin. Epic Trailer Sounds gives a good overview of what the company does.


For sheer guffaw value, it’s hard to beat The Hipsters Bongos. Dial in annoying comments and mistakes as though these were parameters in any plugin, and you have output that might be useless, but it’s so much fun you won’t mind.


Speaking of different, how about a collection of drum sounds made from samples of a Citroen C4? For those unfamiliar, this is a French compact car. Door slams become snare beats and various metal parts round out the kit.


Yet another alternative percussion set, the wood planks used in this library by Kralc have a much more organic feel that likely has more uses than the previous two entries. Upbeat acoustic, alternative or world music works may benefit from these lively hits.


Rich orchestral pads with the ability to layer are always handy when scoring and switching between major and minor chords using playing velocity is an intriguing performance option. There are two instruments here: Orchestra Chords and Sustained String Chords, perfect complements for each other.


Not a full Kontakt instrument, AcousticGuitar Free is a feature-limited version of the AcousticGuitar Full product. The finger-picked style is included, while picked and strummed styles are not, nor are keyswitching functions.


Built around a six-voice choir using multisamples to create legato vocal pads, Mihai Sorohan’s Vowel Ensemble is another Kontakt library that can ease the chore of layering background oohs and aahs with realism.


Clear and metallic, the way a glockenspiel should be, Jonathan’s Glockenspiel includes reverb, equalization and detune functions for realism and sound shaping purposes. Seven velocity layers and mallet drops add to the authenticity of this library.


The trick with creating a convincing djembe sample is how to handle the pitch changes that give this “talking” drum its unique flavor. Add the words “pitch wheel,” and many will smack their foreheads and cry, “of course!”


Struck metal has a distinctive sound, whether it’s a deliberate instrument or a found percussion object. Riverwood Air offers up a mix of both types of sounds, with an interface that provides tuning and a host of signal processing effects. A must-have for the industrial music producer.


Featuring legato recorder samples, this is a low-resource Kontakt instrument that fills the bill over ensembles or small groups. It’s probably not at its best as a solo instrument, however.


Finally, we come to the lite version of Output’s Signal pulse engine synthesizer. As with many of Output’s products, this is a sound creation tool of unique design and capability. While Signal FREE is feature-limited, there’s still plenty of content and control.