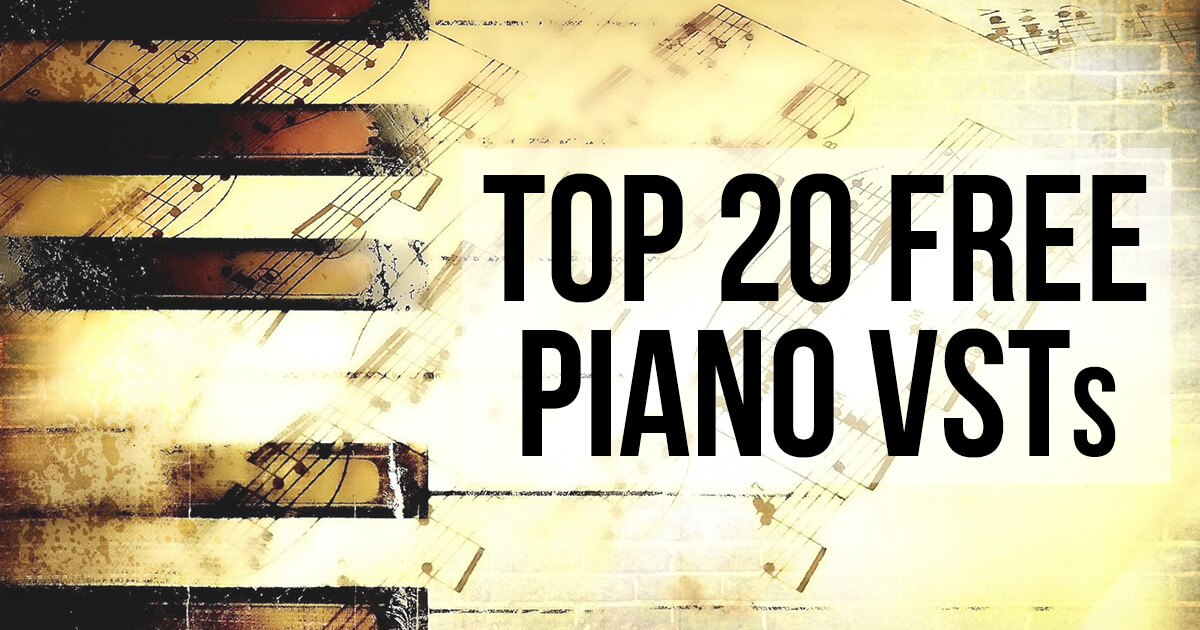 Get in the Piano Game with these No-cost steals

The tone, timbre and depth of a well-tempered acoustic piano has perhaps the widest expressive range of any instrument this side of a complete orchestra. Encapsulating the magic in digital audio samples, combined with a compelling way to play back these samples with grace and subtlety is something of a holy grail for plugin developers and VST users alike.

Oh, and you want that in a FREE VST? Is that even possible in a you-get-what-you-pay-for world? A flip through listings of digital performance pianos reveals prices topping $5,000 and if you want to fork out for a new Steinway concert grand, expect to part with about $150,000.

True, much of these costs have to do with the mechanics of building or replicating piano keys, something many VST users forego in the name of convenience and affordability. What it really comes down to is the sound for studio or bedroom producers. There’s some great news for those of you lusting for luscious piano sounds on the cheap. There’s not only a decent and free piano VST out there. We’ve compiled a list of 20.

If you need to brush up on your rendition of “Chopsticks,” now’s the time, since each of these plugins has something to offer with a price tag you to which you can’t say no.

The Best of the Best

When it comes to the Zero Dollar price tag, it can be tricky to assign price/performance ratios. We should be grateful we’re getting reasonable quality for free, right? Into that mindset, sometimes you’ll hear a free plugin and immediately think, “What’s the catch?” So it is with Bitsonic’s Keyzone Classic.

First, Keyzone Classic covers the gamut, albeit in a simple and straightforward manner. The Steinway Grand Piano patch competes with expensive piano plugins and even the onboard sounds of some hardware digital pianos. If you record lots of solo piano, this may be the one.

And there’s still four other patches, two more pianos and two electric pianos. The simple interface is up to the task and offers features that hardcore pianists may never use, but habitual tone tweakers will eat right up. LFO on a Steinway? It can happen! But as for high quality, mainstream piano, Keyzone Classic is our pick for Best of the Best.

Literally, from the University of Iowa, comes the Iowa Piano. This is about as basic as a piano VST gets, though you do get ADSR (attack, decay, sustain and release) adjustment capability. There’s one piano, a Steinway grand, with nearly every note on the keyboard sampled individually. Some of you new to VSTs and sampling might think, “aren’t all notes sampled individually?” That’s a big nope.

In the early days of digital sampling, file sizes were a much bigger limitation than they are now, but reasonable size still has plenty of advantages. It’s common to sample a few notes directly then digitally extrapolate the pitch to fill in the other, non-sampled notes. Samples do double (or more) duty, files stay small, resources aren’t strained. The sound? Well, it’s often not quite right.

This free VST plugin bases on free samples provided by the University of Iowa. These are warm and convincing across most of the keyboard, but there are some quirks with panning and mono versus stereo on some notes. Perhaps best suited for ensemble recordings, performance and practice, the Iowa Piano is nonetheless a great sounding contender.

The tonal difference between grand and upright pianos is pronounced. You can play the same music on each instrument, though sometimes these differences invite varied interpretations. The Versilian Upright Piano isn’t made to sound like a concert grand. It’s a clean, bright upright, sampled in tritones, that is, every third key. Versilian calls it a “sketching” piano, but don’t sell this plugin short. It’s a great sound that may provide your piano part with the bite it needs to cut through a mix.

Like many piano VSTs, the Versilian uses round-robins, two in this case. Simply, this a programming feature intended to add realism by using samples with slight differences for each note, as well as velocity differences. It’s difficult to get an acoustic piano to sound precisely the same note with the same timbre, even when you attempt to use the same pressure and attack. Even unschooled ears can hear “boring,” so round-robin programming saves you some of the hassles of humanizing.

Prepared pianos are those that are altered somehow to provide a sound that’s obviously not a straight piano. Spitfire Audio offers up the Soft Piano, an instrument with strips of felt placed between the hammers and strings. The result is a warm and muted sound that won’t be the right fit for every application, but it may be the perfect solution to tame stridency in a piano part. A specialty piano VST. Spitfire also throws out quite a number of free VSTs, so keep them in mind when you’re not in a piano mood.

Also from Spitfire Audio, the Electric Piano similarly fills a niche. This is classic, vintage tine-based electric piano that’s very convincing and a bit retro. Even its brightest modes have a certain warmth to them. Like most of Spitfire’s offerings, the interface is a minimalist’s dream, clean and functional. Of course, this also means you won’t have the range or flexibility offered by commercial electric pianos, but with a solid and authentic main instrument, you can do worse than the Spitfire EP.

Dead Duck Software’s DPiano-A won’t win awards for most exciting user interface, but it has not only basic functionality, it includes a few extras that may be handy to home in on the sound you want. With eight sounds included in the stock package, there are also plenty of user preset storage spots. With the ability to alter tuning parameters, stereo width, velocity and more.

The AkoustiK KeyZ interface is, again, not going to set any style trends, but face it, no VST is going to be featured in your band’s video. With three piano grand types, AkoustiK KeyZ offers similar sound modification available from most of the other plugins, save for the minimal interfaces used by Spitfire Audio. The sounds of the DSK plugin may be a tad less crisp than some offerings, but there’s nothing deficient here. Different choices for different voices.

For a great rendition of a Yamaha C7, a well-regarded concert piano that’s found everywhere, from studios to concert halls, look no further than Piano. It’s only one of many piano plugins that Sound Magic offers, but it’s the only free VST package. Piano One is further crippled by the removal of some advanced sound shaping capabilities of the commercial version, and less sample data than its big brothers. What remains, though, is a solid sounding concert piano.

If pub or saloon piano is your thing, you’ll want to check out the London Piano. With a simple and effective interface, you have ADSR adjustment at hand, but little else. It’s such a happy and charming sound, though, you may be happy with it as-is.

City Piano boasts four velocity layers (many of the others on this list use 3). The sampled acoustic piano is a Baldwin baby grand, and like the London Piano, volume, pan and ADSR are all the parameters you can play with. This is another take on the grand piano sound, probably not a solo recital sound, though still warm and authentic.

Sharp, bright and almost harpsichordian, the EVM Grand Piano has the definition to handle fast-paced baroque counterpoint without losing clarity. That characteristic may also make this a great accent in complex mixes. Another simple interface, the virtual 1U rackmount style is practical and looks good.

When you’re looking for a little something extra, such as string pads layered with your piano, you’ll normally turn to commercial plugin releases. RDG Audio removes the need with Free Piano. This VST has “new age” written all over it. There are fully a dozen parameters for sound shaping as well as three layers of samples. If that’s not enough, Piano Staccato and Piano Auto Sustain expansions are also available and also free.

With Salamander reporting 16 layers of velocity for their Grand Piano v3, it’s somewhat ironic that the most prominent video link for this plug-in uses a quantized MIDI file with few dynamics. A shame, because the piano sound itself is solid. Don’t let the poor-quality performance distract you from this warm, round-sounding VST.

Another upright piano in our series, the 4Front Piano uses few resources, has no parameter settings, yet it provides the ambience of a front parlor piano. There’s more than a hint of a tack piano sound, but without the bright hammer hit. If you’re looking for retro acoustic piano tone, consider 4Front as a worthy contender.

Coming from a company called SampleScience, you can be excused for expecting a high-end, feature-laden plugin. What you get with Room Piano, however, is a lo-fi, single-velocity character instrument. Another VST that makes only minor demands of your system resources, it nonetheless has a fistful of parameter shaping knobs. SampleScience has discontinued this plugin, but there are still downloads available if you dig.

Mokafix Audio took a synthesis route, rather than sampling for its Glue Reeds electric piano, approximating a reed-based analog keyboard that uses sticky pads rather than hammers. It makes for a softer attack than most electric pianos, sometimes almost synth-y in nature. Definitely an out-of-the-ordinary sound that could fit 60s pop, 70s fusion or it may take you off in other new directions. Perhaps the quirkiest piano on our list.

Starting with a Kawai grand piano the Tascam CV (continuous velocity) Piano is another departure from traditional sampling, using spectral morphing rather than volumes of velocity layers to create its lively and bright dynamics. Though that might suggest an unnatural sound, the CV Piano is anything but. This is shimmery piano goodness in a VST with light memory demands. Great alone or cutting through a dense mix, there’s plenty of versatility in its interface. There’s something about this plugin that demands attention.

Another offering by Safwan Matni, the name says it all. The sound is straight from the lounge, warm and romantic. There’s no strident brightness that sometimes affects upright piano samples. Again, no controls, just a sound that completely hits the target. You can almost hear the tip jar rattle.

There’s retro and then there’s ancient. The look feel and sound of the MDA Piano are from another era. This is not a VST to compete with the leading-edge digital pianos. There are more accurate reproductions out there, some are on this list, but if 8-bitting and bit-crushing tells us anything, it’s that realism isn’t everything. And hey, this is a plugin from the turn of the century. As Windows 3.1 as the MDA piano interface looks, it’s both intuitive and powerful.

This is just a piano plugin. If you can’t be bothered twiddling dials, and just want a piano playing a piano sound, then General is the ticket. No adjustments, knobs, effects or add-ons. Perhaps this is more what you’d expect from a free VST, but as always, it’s the sound that counts.

There’s not a plugin on this list that can’t find an application, but as it is with so many things, there’s not a Swiss Army knife VST that can do all things for all people. You know better than anyone what you need, so focus on those plugins that tilt toward your direction.
And hey, they’re all free. Since you can download all these VSTs and get four quarters change from your dollar, load a bunch and let your ears do the choosing.